We are specialists for glass, ceramics and semi-conductor materials. Our core competencies lie in fracture mechanical analysis methods and manufacturing processes with a focus on hot glass forming, ultra precision processing, joining techniques and special separation and cutting techniques. A particular focus is placed on edge bonding techniques for vacuum insulating glass, low-damage machining techniques for precise contours in precision components as well as separation techniques for sheets of laminated glass. Our findings lead to solutions for new processes and products and to the informed assessment of their cost effectiveness and feasibility in industrial use.

Contact us! Together we'll find a customized solution for the challenges you face.

How to work with the Fraunhofer IWM

The process temperatures of between 500 °C and 700 °C arising during hot glass forming and the optical quality standards involved mean that the mold material must fulfill extremely demanding specifications. Only a few, mostly monocrystalline or amorphous materials are suitable, e.g. monocrystalline silicon. This, in turn, increases the demands placed on the micro-cutting process. In order to machine to the required surface quality in just a few processing stages...

Solar cells are multi-layered structures consisting of different materials. The different thermal expansion coefficients of silicon and the layer materials can create permanent warping in the solar cell. In industrial practice, the production machines can no longer process a solar cell with more than approx. 2 mm warp. In order to improve yield, we investigate the mechanical behavior and particularly the warping of solar cells with different...

When wire sawing silicon material for solar cell wafers, a considerable amount of the silicon that has already taken a lot of energy to clean and crystallize is lost in the form of non-recyclable silicon dust. A core topic is therefore the reduction of the sawing gap width and research into the fundamentals of material removal in the single saw gap process. The work involves experimental and numerical investigations on new wire, abrasive and substrate...

The Fraunhofer IWM offers an industrial glass bending unit for glass dimensions of up to 1 m² with extensive manufacturing and measurement equipment. Depending on the type of application, different techniques are used to apply the bending forces and to heat the glass.

In contrast to conventional cutting processes, in which micro-fissures form in the break edge, with this process glass can be cut with almost no defects. This is achieved by introducing deliberate thermal stresses into the glass. Local stress fields, which are used to guide a separating crack through the glass with contour precision, are typically generated using laser light. Lasers can apply heat controllably to exactly the right position and with exact timing, which makes them an ideal tool for this task.

The shaping of glass is largely determined by its visco-elastic properties, which in turn are a function of temperature. To achieve the required final contours, both the relaxation behavior of glass and the formation of internal stresses must be controlled. A numerical description of the process helps to clarify this problem and to allow the controlled heat introduction.

On the basis of many years of experience with failure events, Fraunhofer IWM has developed concepts for characterizing and analyzing failure in brittle materials such as glass and silicon. These concepts have been used many times on glass components for automotive applications, for architecture and in solar power modules and solar cells for determining the causes of failure. Tests are performed on single panes, domestic glass, solar wafers and solar cells and on complete units such as windows, complex glazing systems and solar modules that have been damaged or broken either during manufacture or later during use. These tests provide conclusions as to the mechanism of the breakage, the causes of failure, initial damage and how the failure developed. Identifying the causes of failure gives customers valuable insight into the development of manufacturing processes with low failure rates and into improving the mechanical properties of products during their end use.

To achieve a mechanically sound soldered joint, the glass must be coated all round with a layer of material capable of being soldered. This material must withstand high thermo mechanical loading and must be well wetted on the surface by the liquid metal solder. At the same time, however, no diffusion of the metal solder must be allowed to occur through the coating to the glass surface in order that the adhesive strength of the joint is not compromised. Coatings for the metalization and soldering of glass have been developed at Fraunhofer IWM. A system of multiple layers with a ceramic bonding agent and solder able intermediate and cover layers has proved itself particularly suitable. Thus the metal band can be joined to the glass by means of a metal coating of the glass and soft solder.

Contributions to scientific journals, books and conferences as well as dissertations and project reports...

Dr. Rainer Kübler from the Fraunhofer Institute for Mechanics of Materials IWM was awarded the Joseph-von-Fraunhofer Prize for the development of an innovative glass separation technique. 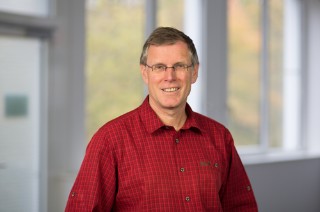